Dan...Drums and Lead Vocals
Dan DeWitt adds new dimension to "Scarlett's Fire" with a style all his own and great vocals.

Dan was born on November 23rd.  He now resides with his wife Denise in Downers Grove, Illinois. They have one son, Alex who is attending college at this time.

Dan's day job is with Compass Consolidators where he has worked since 2006 making intermodal and over-the-road transportation arrangements. He attended Lyons Township HIgh School and the College of Dupage.

His favorite things to do are playing drums and making music. After music, his Interests include, in his words, "the pursuit of happiness, man's search for meaning, and motorcycles".

His other interests include reading good books and watching good movies. Some of his favorite books are "The Bridge of San Luis Rey", "On the Road", "The Autobiography of Malcolm X", "Zen", "The Art of Motorcycle Maintenance", "Robinson Crusoe",  "Hamlet" and "Don Quixote". Some of his favorite movies are "The Big Lebowski", "The Godfather", "The Godfather II", "The Shining" and "Pulp Fiction".

Dan added a whole new dimension to "Scarlett Fever" aka "Scarlett's Fire", with his great lead vocals and interesting song list. Dan has got the beat that adds the heat. 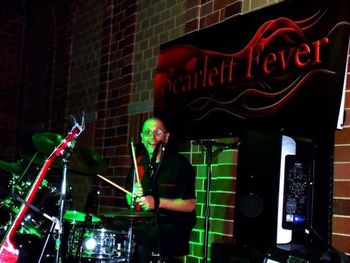 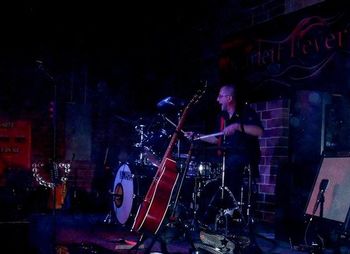